With the 2020 Nobel Prize going to three scientists who led on the discovery of the hepatitis C virus, Adriana Albini acknowledges the valuable contributions that these and other virologists have made over many decades to advancing our understanding of cancer and boosting efforts to prevent and control the disease. 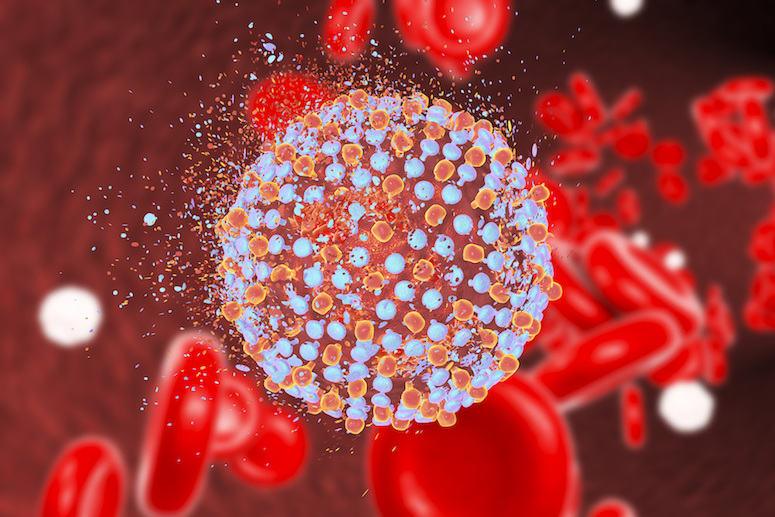 As the world holds its breath in the hope of a pharmacological drug or a candidate vaccine able to counteract SARS-COV2 infection and fight COVID-19 pandemic, it is worth reminding ourselves that almost one in five cancers are associated with viruses. Progress in understanding their pathogenesis, detecting them, and preventing or curing infections has yielded some of the most important wins in efforts to reduce new cases and deaths from cancer worldwide, and could achieve much more if the tools we now have were rolled out more widely.

The complexity and importance of this area of research has been recognized with a series of Nobel prizes over the past 45 years, most recently with the 2020 Prize for Medicine or Physiology, which was awarded for discovery of hepatitis C – a virus that is implicated in liver cancer and certain lymphomas.

Approximately 15%‒20% of human cancers worldwide are caused, directly or indirectly, by viruses. So far, seven viruses have been shown to be implicated. They are listed on the of the MD Anderson Cancer website, and are classified by the International Agency for Research on Cancer (IARC):

Cancers associated with the seven viruses

How they work, how we limit the damage

Viruses can cause cancer as a result of direct transforming properties, or through indirect effects on the host. The first mechanism relies on the ability of viral oncoproteins to inactivate cellular key tumour suppressor signalling pathways, such as pRb or p53, or to activate oncogenic signalling pathways that establish or maintain the transformed phenotype, such as Ras and Myc. The human papillomavirus, for instance, is able to express oncoproteins in the host cell. The indirect effects relate to the ability of viruses to induce generalised immunodepression or establish a state of a chronic low‐level inflammation. This process results in profound changes in the quality of inflammatory responses and the tissue microenvironment, that shift the balance towards promotion of a precancerous state and cancer progression.

The characteristic shared most widely across human tumour viruses is that only a small percentage of people infected will go on to develop cancer. Clinical management of patients infected with carcinogenic viruses therefore requires effective predictive tools to assess their risk of developing a neoplasm and ensure prompt diagnosis of lesions to permit intervention at a curable stage.

The human papillomavirus is a prime example. HPV is responsible for almost all cases of cervical cancer in women, though only a small minority of women infected by the virus go on to develop the malignancy. HPV is also implicated in more than half of all cases of head and neck carcinomas. At a global level, HPV-positive malignancies account for 4.5% of the total global cancer burden, with more than 600,000 new cases per year. The development of effective vaccines that target different strains of HPV therefore gave an important boost to efforts to reduce the incidence of cancer. The approval in 2006 of a prophylactic vaccine for high-risk HPV 16 and 18 and low-risk HPV 6 and 11, and of a broader vaccine in 2009, was a true revolution in oncology. A 2019 systematic review looking at studies from 14 high-income countries indicated that after 5–8 years of vaccination, the prevalence of HPV 16 and 18 decreased by 83% among girls who were vaccinated aged 13–19 years, and by 66% among women vaccinated at 20–24 years. To be effective, vaccination has to be done prior to infection, as a prevention; it does not immunise people already infected with HPV or with HPV-associated neoplasms, so the development of a therapeutic HPV vaccine would be an important next step. With the tools already available, research suggests that, with the right policies on awareness, prevention, vaccination, early detection, surgery and treatment, it should be possible to completely eliminate HPV-related cancers from Europe.

With the right policies on awareness, prevention, vaccination, early detection, surgery and treatment, it should be possible to completely eliminate HPV-related cancers from Europe

The hepatitis B virus is another strongly carcinogenic virus with a high global prevalence. It is the leading cause of liver cancer, and affects almost 300 million people worldwide. The mechanisms at work, however, are still poorly understood. It is a non-cytopathic virus ‒ it does not act directly on normal cells to turn them cancerous ‒ but it has been demonstrated to increase the risk of cancer by mediating chronic liver damage through abnormal immune attack. Chemotherapy is not truly effective against HBV-associated liver cancer. Preventing HBV infection through vaccination is currently the most efficient way to cut the incidence of HBV-related cirrhosis and liver cancer. A vaccine exists that is safe and effective in 80‒95% of cases, and is available. HBV vaccination programmes have been in place in a number of places for many years, and have been shown to be highly effective, with a 2018 systematic review indicating a 76% lower prevalence of HBV infection among adolescents and adults in birth cohorts that were offered universal infant vaccination compared with cohorts for whom infant vaccine programmes were unavailable.

The study of viral carcinogenesis has been critical for our wider understanding of cancer, leading to the discovery of oncogenic viruses, of oncogenes and the link between viruses and human cancer. The progress was achieved through interdisciplinary research that brought together the fields of virology and oncology, and has been marked by a series of Nobel Prizes over the past 45 years.

The 1975 Nobel Prize in Physiology or Medicine was awarded jointly to David Baltimore, Renato Dulbecco and Howard Martin Temin “for their discoveries concerning the interaction between tumour viruses and the genetic material of the cell”. The 1989 Prize acknowledged the work of J. Michael Bishop and Harold E. Varmus “for their discovery of the cellular origin of retroviral oncogenes”. The recognition of these two milestones, 14 years apart, opened up our understanding of how somatic cells and viruses exchange genetic information.

This year’s Nobel Prize.in Physiology or Medicine was Awarded jointly to Harvey J. Alter <link>, Michael Houghton<link> and Charles M. Rice<link> “for the discovery of hepatitis C virus” ‒ a pathogen that causes nearly 400,000 deaths per year, yet took decades of work to isolate and replicate in vitro.

The work of these scientists paved the way for effective treatments for the infection that are now available. A large number of people with chronic HCV infection are at risk of developing liver complications, such as liver cirrhosis and hepatocellular carcinoma. Chronic HCV infection can also cause low‐grade B‐cell lymphomas. The recent introduction of direct-acting antivirals (DAAs) has helped the fight against HCV, inducing virus eradication in more than 90% of those infected. The availability of improved treatments has given rise to the false assumption that the HCV problem has been solved. In reality, treatment is not available everywhere, and the infection can be asymptomatic for many years, causing damage to the liver that is only detected when symptoms appear. The development of vaccine to protect against HCV is therefore essential.

Prophylactic vaccines against pathogenic viruses have an excellent record as public health interventions in terms of safety, effectiveness, and ability to reach economically disadvantaged populations. The fight against virus-associated cancers has been one of the big successes of cancer prevention efforts. Epidemiological evidence for the effectiveness of vaccines against HPV and HBV, in areas with well-organised vaccination programmes, is very strong. Anti-viral therapies targeted at HIV and ‒most recently ‒ HCV have decreased the burden of cancers associated with those viruses.

The 2020 Nobel prize serves as an important reminder that progress in cancer requires scientific collaboration beyond the field of oncology.

Trends in liver cancer: is it time to change prevention strategies?

HPV-FASTER: broadening the scope for prevention of HPV-related cancer