Cancer and the effects of treatment increase the risk of blood clots considerably, with venous thromboembolism being the second most common cause of death in patients with cancer. Rachel Brazil asks how we ensure the risk is identified and managed in every patient at risk. 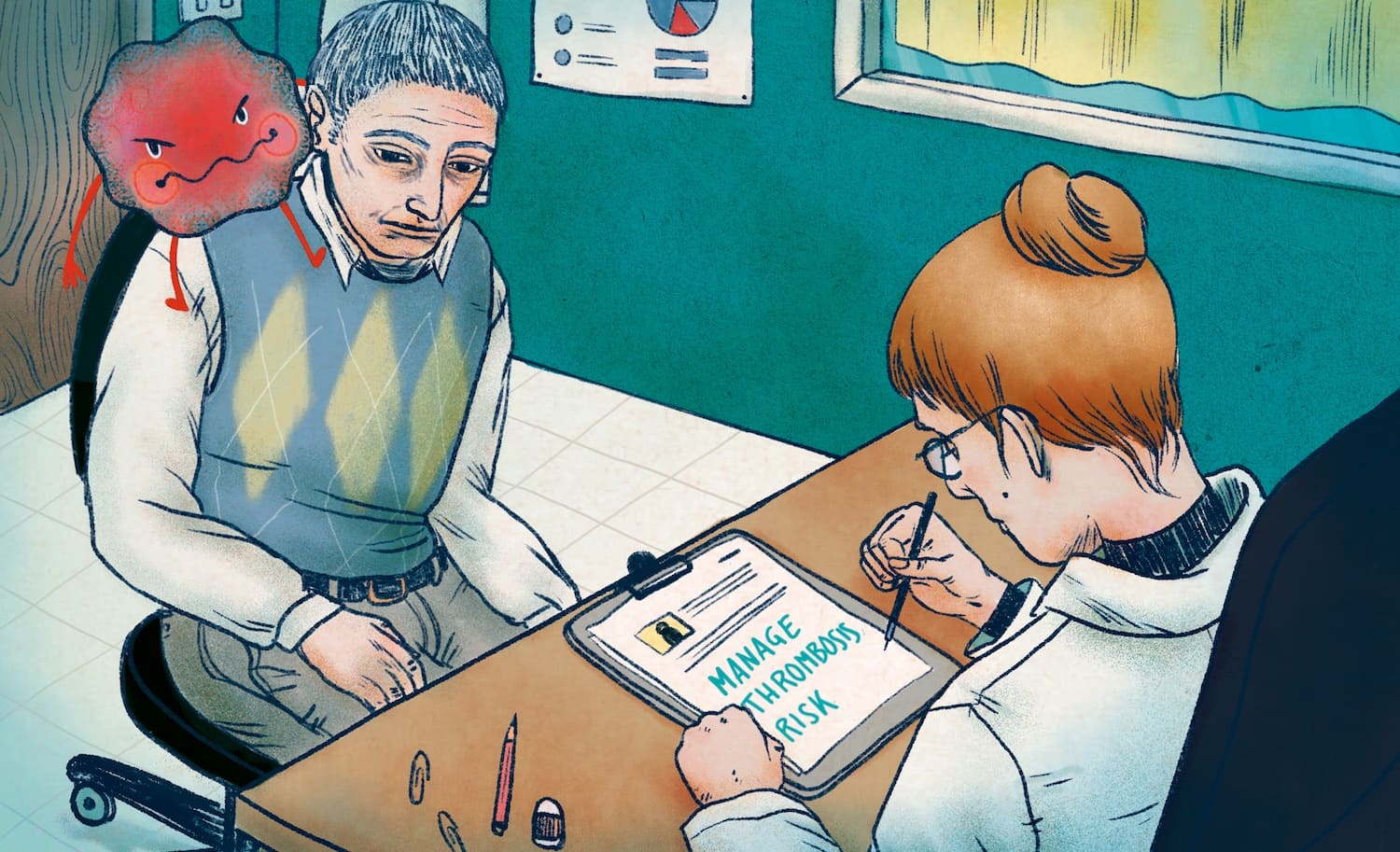 Venous thromboembolism (VTE) is the second most common cause of death in people with cancer, yet it has received far less attention than other possible complications, such as infection or neutropenic sepsis. This situation is beginning to change, with events such as the World Thrombosis Day, which was launched in 2014 to help to raise awareness of the issue. The oncology community is itself now starting to take cancer-associated thrombosis (CAT) more seriously, and is looking at how best to intervene for those at risk.

VTE is a collective term used to describe both pulmonary embolism (PE) and deep vein thrombosis (DVT), the latter of which describes blood clots deep in the veins. When these clots start to break down they can become lodged in the pulmonary artery, leading to a pulmonary embolism and in severe cases vascular collapse and death.

DVT itself cuts off the blood supply, leading to pain, swelling, redness and warmth near the blockage. “Well over 95% of clots stem from clots in the leg,” says Annie Young, Professor of Nursing at the University of Warwick, England, “[They occur most] often in the proximal part of the lower extremity of the leg, but you also get them in the calf.” Thrombosis can also be asymptomatic, known as ‘incidental’ thrombosis. Diagnosis of VTE is by ultrasound or CT pulmonary angiogram, but a blood test can detect clotting from the concentration of D-dimer, a fibrin degradation product, in the blood.

A key cause of this raised risk comes from pro-coagulants that are released by cancers, says palliative care and thrombosis expert, Simon Noble from Cardiff University in Wales. “Not all cancers are the same, some are more hypercoagulable than others.” He names the ‘big culprits’ as upper gastrointestinal (GI) cancers, cancers of the stomach, oesophagus and pancreas, brain tumours, and lung cancers, “You’re looking at maybe a 19- to 20-fold increase in the risk of clots.” Patients with metastatic and advanced cancers are at particularly high risk, says Young. “60 to 70% of patients with advanced pancreatic cancer get a clot.”

“Not all cancers are the same, some are more hypercoagulable than others… [in] the ‘big culprits’…you’re looking at maybe a 19−20 fold increase in the risk of clots”

In addition, the cancer treatment itself can also increase the risk of VTEs. “If you’ve got a central venous catheter for administration of [systemic cancer therapies], that’s a physical barrier in the blood vessel [that can lead to clotting],” says Young. Plus, some cancer therapies themselves pose a risk. “[Conventional] chemotherapy will increase your risk of clots, and we’re seeing now that the immunotherapies, the targeted anti-cancer therapies are equally pro-thrombotic,” says Noble, which he says explains why CAT often occurs early-on in a patient’s treatment journey.

Today, there are several options to choose from for treatment and prophylaxis, but that was not always the case. “If we were to go back to 20 years ago, there was only one kid on the block, and that was warfarin,” explains Noble. But its use needed constant monitoring he says, and “we were seeing a risk of recurrent VTE as high as about 16%.” Treatment shifted to low-molecular-weight heparins (LMWHs) – anticoagulants that mimic heparin, the polysaccharide that naturally inhibits coagulation. They are administered subcutaneously as a daily injection. LMWHs halved the rate of recurrent clots in cancer patients, plus there were fewer drug-drug interactions (Lee AYY et al. N Engl J Med, 2003).

Nikolaos Tsoukalas, a medical oncologist at the General Military Hospital in Athens, who recently carried out a study comparing VTE therapies, says LMWHs are often still the first choice to treat CAT, “on average, patients with CAT, DVT or pulmonary embolism are treated for approximately three to six months.” However, he says “there is a trend to make a switch to the more convenient orally delivered new anticoagulants.” There are four of these newer oral direct-acting anticoagulants, or DOACs: apixaban, dabigatran, rivaroxaban, and edoxaban. They are vitamin K antagonists and reduce blood clotting by blocking the production of the vitamin K-dependent proteins involved in blood coagulation.

“The big side effects from all these [therapies] is bleeding,” says Young. Anticoagulants leave people at risk of dangerous bleeding in the stomach or brain. A number of trials have compared the efficacy and risks of these therapies. There is evidence that the DOAC apixaban causes fewer major bleeding episodes and prevents more DVTs than warfarin. Recent trials comparing these new drugs to LMWH have also shown good results (Cy A et al. Ann Oncol, 2019). “The data is very exciting,” says Noble. “It not only shows [they are] not inferior to LMWHs, it also suggests a preferable bleeding rate.”

But Noble adds, “the use of DOACs comes with some caveats… there is a high rate of bleeding in patients with GI cancers, and especially upper GI cancers.” The 2018 Hokusai-VTE cancer trial compared edoxaban to LMWH and found that, in the subgroup of patients with GI cancer, edoxaban was associated with a 7.9% higher risk of major bleeding (Mulder FI et al. Thromb Res, 2020). “In my clinical practice, I’m [also] still cautious with urothelial tumours, especially the bladder cancers,” says Noble.

Additionally, because these treatments are administered orally, they may not be suitable in cases where absorption is a problem, says Tsoukalas. “If the cancer patient has problems with their digestive system due to mucositis from systemic [cancer] treatments, or some kind of surgery, where the [working] of the digestive system has been changed, there could be problems.” There are also additional drug‒drug interactions, for both cancer and supportive care therapeutics, he adds: “Some of these new [oral drugs] have interactions with dexamethazone, or even drugs such as tamoxifen, so we should use them with caution.”

“There is a clear role for them, but not for everyone,” agrees Noble, “We need to know which patients we can use DOACs for [and] which we can’t, rather than trying to look for a blanket ‘one size fits all’”.

Stratifying the risk of VTE

Most scientific bodies recommend giving prophylactic treatment to prevent VTE for at least one month after surgery, as well as for patients with active malignancy and other cancer patients classed as ‘high risk.’ Young says from recent trials it is clear, “we should be thinking about risk-stratifying patients to try and find [those at] the biggest risk.” But says Noble, “we’re pretty bad at identifying those at risk of developing DVT and giving them the appropriate prophylaxis.”

Prophylaxis is a standard approach, for example, for people with multiple myeloma treated with lenalidomide or thalidomide with dexamethasone, which puts patients at high risk for VTE. “I think practice is embedded there,” says Noble, “[but where] I don’t see it embedded is in [other] highest risk patients, [such as those with] pancreatic cancer.”

“We should be thinking about risk-stratifying patients to try and find [those at] the biggest risk.”

Currently the most common method to assess risk in cancer patients is the Khorana Risk Score Scale, which gives patients a score from 0 to 6 – the higher the score, the higher the risk. The scale takes into account the type of cancer, the patient’s platelet count, leukocytes count, haemoglobin levels or use of erythropoietins, and body mass index. “If the [score] is 2 or more then the patient is probably at 10% risk of having a clot and should be given prophylaxis,” says Young.

But Tsoukalas says: “In daily clinical practice, the Khorana Risk Score is not the ideal one, because there are some features that are related to the risk of thrombosis that are not included in this score, such as the stage of the disease, and also the type of treatment the patient is receiving.” People with metastatic cancers and with tumour types such as pancreatic cancer are at higher risk of VTEs, and “there are specific chemotherapy drugs that are linked to a higher risk of thrombosis, such as cisplatin,” adds Tsoukalas.

Tsoukalas would like to see attention given to other co-morbidities including renal and hepatic issues, atrial fibrillation, and heart failure, as the risks are cumulative. “We should try to assess the risk of cancer-associated thrombosis for each of our patients and try to take everything into account and balance the advantages and disadvantages [of starting prophylactic treatment].” He recently undertook a study of 120 patients who had already suffered a thrombotic event and had received anticoagulant treatment for more than six months, and found long-term use was effective and safe (Papakotoulas P et al. Anticancer Res, 2020).

“In my opinion we have to consider more frequent thromboprophylaxis for cancer patients, especially in the Covid-19 era,” adds Tsoukalas, as Covid-19 itself has been associated with cases of thrombosis and compounds the risk (Karamitrousis E et al. Forum Clin Oncol 2020).

People with cancer have a low awareness of their risk of thrombosis. A 2018 European Cancer Patient Coalition survey found that only 28% of respondents were aware of the phenomenon and its risk factors. “We have to really concentrate on raising awareness,” says Young. “Cancer patients are so taken up, understandably so, with their diagnosis and their treatment, to the extent that sometimes it’s hard to get the message through.” Noble agrees that patients need to be more aware of CAT and seek treatment quickly. “One of our practice audits showed that the average time it took for a patient to seek help when they had signs suggestive of thrombosis was nine days.”

Nurses can play a huge role in patient education, says Young, “We’re at the shop floor.” She suggests outpatient treatments provide opportunities for patient education on the signs and symptoms of clots. The World Thrombosis Day, which occurs annually on 13 October, is continuing to increase awareness of thrombosis in general and its association with cancer. The campaign has produced educational materials including videos and information directly for patients.

“Raising awareness amongst healthcare professionals is also important,” says Noble. Tsoukalas believes there has been an increase in the awareness among medical oncologists in Europe during the past couple of years, but says, “there are still huge differences in the levels of awareness.” Noble would like to see clinicians who specialise in CAT in each oncology unit, to allow them to keep up with an ever-more-complex and rapidly evolving field.

“Nurses can play a huge role in patient education, says Young, “We’re at the shop floor.”

For patients, experiencing PE or DVT is not only potentially fatal, but can have long-term mental health implications. “We now have data to show that there’s significant psychological impact as well, with a large proportion of patients developing long-term psychological distress — something that’s been termed ‘post thrombotic panic syndrome’,” says Noble.

With the increasing success of cancer treatment itself, losing patients to VTE is becoming even more unacceptable argues Tsoukalas, “We have a new era of treatment in oncology and we have patients that have better overall survival and, in some cases, we can consider cancer as a chronic disease. So, it is not fair for these patients to lose their fight due to this complication.”

ESMO have published clinical practice guidelines on the management of VTE in patients with cancer. Young has also edited a guide for nurse specialists and allied health professionals. on cancer-associated thrombosis