In the majority of cancers it is the metastases and not the primary tumour that prove fatal. Adriana Albini reviews steps in the malignant process and strategies to block it. 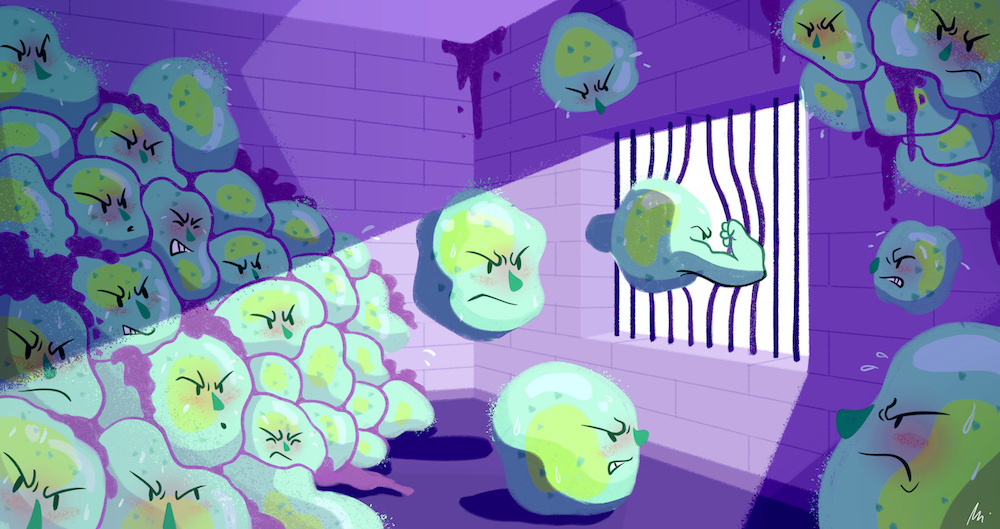 Why and how do cancer cells travel from their original site to seed new tumours elsewhere in the body, and what can be done to stop them? A series of presentations at the virtual June 2020 annual meeting of the American Association of Cancer Research (AACR) showcased some of the fascinating insights that are helping piece together the evidence. Two scientists, Zena Werb and Josh Fidler, who helped open up this area of research long before it became the hot topic that it is today, passed away only weeks before the AACR congress. This review is dedicated to them.

Beginnings of a metastatic cell

As we now know, the seed of cancer is a single transformed cell, which begins to multiply and grow in an uncontrolled way. It may be dormant for a while, but then it wakes up and divides into daughter cells. Through further mutations the initial clone gives rise to other clones, as they evade the control mechanisms used by cells and by the body to guard against carcinogenic transformation, leading the initial tumour to become increasingly aggressive.

However, a malignant tumour will not be content to remain restricted to the area where the tumour arose. Some of the crazed cancer cells will metastasise ‒ a process by which they detach from the initial mass, and head to distant organs. The trip starts, and it has a precise destination ‒ a colon cancer may send emissaries to the liver, while a prostate neoplasm will colonise the bones. Patricia S. Steeg, who gave the Women in Cancer Research Charlotte Friend Lectureship at virtual AACR has focussed her recent studies on breast cancer brain metastases. For many patients, this process spells the transition from a potentially curable to an incurable cancer, so understanding the metastatic process and developing ways to intervene to slow or halt it, is a very important area of research.

The first step towards a cure for a metastasis is to get to know malignant cells better. But we also need to understand the role of the tumour ‘microenvironment’ ‒ the apparently healthy tissues within which the tumour develops and which malignant cells hijack for their own ends to help them at all stages of their metastatic journey.

The search for a more satisfactory environment seems to be a key motivation driving ‘restless’ cancer cells to break free of the primary tumour and go in search of a hospitable place to colonise. One potential cause of dissatisfaction with their initial environment is the dwindling levels of oxygen available within the tumour mass as the cancer grows, which makes for a ‘suffocating’ (or ‘hypoxic’) environment. Is it surprising that cells should move in search of a ‘breath of fresh air’? They relocate to a ‘more comfortable apartment’. Defining the mechanism by which alterations in cellular oxygen lead to changes in the cells’ gene expression won three researchers the 2019 Nobel Prize in Physiology or Medicine.

And yet cells do not circulate freely around the body. In order to move, they must continually cross the matrix, or barrier cells, such as endothelium or epithelium. Isaiah ‘Josh’ Fidler, who died in May 2020, was one of the most important figures developing our understanding of how cancer cells get through these barriers to pursue their metastatic journey. As the founding Chair of Cancer Biology at the MD Anderson Cancer Center, and professor and director of their Metastasis Research Laboratory, Fidler developed the theory of the ‘decathlon’ that metastatic cells have to complete to break away from one site and travel to, and then colonise, another.

To extricate themselves from the primary tumour and launch themselves into the circulation, malignant cells first have to degrade the extracellular matrix ‒ dense and intertwined tissues designed to trap fugitives. To do this they use molecular scissors or hammers: metalloproteases (MMPs). MMPs, especially MMPs 1 and 2, are crucial for invasion and metastasis. MMP2, also called ‘gelatinase’, has the specific function of destroying basement membranes and degrading collagen IV, which provide the containment structures for organs and blood vessels.

Proteases remain among the most interesting molecules to block, but developing drugs specific to that target has so far proved very difficult. The approach currently favoured is to act indirectly on the proteases by targeting the growth factors that stimulate them.

Travelling in disguise and in company

A transformed epithelial cell can ‘disguise itself’ as a mesenchymal cell, a simulated fibroblast, to ease their escape. Epithelial‒mesenchymal transition (EMT) contributes to development of the embryo and tissue repair, but it also promotes carcinoma progression ‒ an onco-foetal programme. Issues in targeting EMT for better therapeutic response in carcinoma were presented at the virtual AACR by Jean-Paul Thiery, visiting professor at the Department of Clinical Oncology, at Hong Kong University. His internationally renowned studies address mechanisms of resistance driven by intermediate EMT states in carcinoma; they focus on strategies to restore immune response, with the ultimate goal to apply EMT-based therapeutic approaches in clinical trials.

A cell metastasises more easily if, in exiting the primary site into the circulation, it is accompanied by fibroblasts or other cellular elements of the stroma. This is a further example of cancer forcing ‘good cells’ to ‘commit a crime’.

Similarly, the cells of the immune system, in particular innate immunity, macrophages and neutrophils, can also become allies in the metastatic process. Zena Werb, former Professor and the Vice Chair of Anatomy at the University of California, San Francisco, who sadly died in June 2020, did the early work showing that components of the extracellular matrix are involved in signaling. She used fluorescence microscopy to demonstrate how ‘mad macrophages’ dance along the edge of a neoplasm, making the molecular scissors, MMP9, and degrading collagen IV, thereby favouring the detachment of cells to start their metastatic journey.

A tumour’s capacity to manufacture its own blood vessels, or to divert them in its favour to receive oxygen and nutrients ‒ the process of angiogenesis ‒ is well known. Those same ‘pirated’ circulation channels ‒ the capillaries promoted by the tumour itself ‒ are also used to transport ‘emissaries’ from the tumour to enable malignant cells to navigate to, and then colonise the distant organ that is their final destination.

Against this process of capillary generation, which is indispensable for metastasis, clinicians have at their disposal a battery of effective weapons, including bevacizumab (Avastin), which has proved to be the most universal and powerful anti-angiogenic, and aflibercept. However, it hasnot  been as universally effective as it had initially been hoped.

At the AACR meeting, Robert Kerbel, from the University of Toronto, Canada, who has a long-standing research interest in anti-angiogenics as a potentially less toxic way of treating advanced cancers, addressed some of the challenges to their effective use. He highlighted the risk that, used for prolonged periods, anti-angiogenics may become blunt weapons, or may even stimulate metastasis. He proposed the need for ‘modernising’ the way they are used, arguing specifically that it may be necessary to use them as prolonged, maintenance therapy or in combination with immune therapy.

Preparing the new site for colonisation

In the target organ ‒ liver, lung, brain, bones ‒ welcoming ‘niches’ are formed, where the tissue is particularly suitable to accommodate metastases. It is very difficult to explain why one group of malignant cells chooses one organ to colonise over another. Sometimes a metastatic cell enters the vessels of an organ, but it does not stop there, preferring to pass through to the next destination. Growth factors, immune system cells, mesenchymal stem cells all play a role in preparing a particular tissue to offer a cosy home for metastases.

An important innovative strategy based on ‘getting around’ the tumour ‒ as opposed to attacking it head on ‒ emerged as a key theme from many of lectures and sessions at this AACR meeting. Such a strategy would seek to deprive malignant cells of the support they need from their microenvironment, by modulating, specifically and selectively, cells that under normal circumstances act as our ‘allies’, but in ‘criminal association’ with cancer can turn against us to support the malignant cells.

These ‘criminal associates’, which are what make the metastatic niche – a new room ‒ so comfortable for the metastatic cells, include endothelial cells, capillaries and inflammatory infiltrate, and lymphocytes..

The presence there of numerous innate immunity cells, that are hyperstimulated and become inflammatory and pro-angiogenic, weakens the adaptive immunity component, which is no longer able to kill the tumour, as described by Michael Karin during the lecture for the Clowes Award for Outstanding Basic Cancer Research

This opens up the potential for therapeutic strategies aimed at targeting the tumour microenvironment by administering molecules that inhibit angiogenesis, to block the nourishment and metastasis pathways of the tumour, and that stimulate the immune system and redirect the immune response from playing a pro-tumour pro- inflammatory role to its ‘well-behaved’ role of fighting the tumour,

All credit to AACR CEO Margaret Foti and her staff for creating and giving life and content to an exceptional international 2nd virtual meeting, during the COVID-19 pandemic, with around 40.000 participants.

Doctors should care more of financial toxicity, US survey warns

1 Comment on Malignant: Insights into the process of metastasis and how we can stop it